I have been reflecting on the conversation I wrote about in my last post in which a third grade class at Oakwood Elementary discussed musicianship. I carried their conversation into a fifth grade class at Brandon Fletcher Intermediate School, where fourth grade learners from three elementary schools come together into one school.  I only teach one of three elementary schools in the district so it is important for me to understand the perspectives of the learners coming from the other two schools. We gathered our thoughts using the Chalk Talk thinking routine last Friday. Chalk Talk is a silent way to reflect, gather your thoughts, generate ideas, problem solve, and generate project ideas. We began gathering our thoughts about what makes a musician to frame the rest of the years experiences. 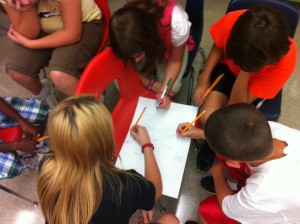 In their homeroom class they are grouped by tables, so for this routine they stayed in those groups. The learners began to have a conversation on paper. Sharing their ideas and perspectives of what they believed makes a musician. Some thought while others wrote, then they would pass the writing utensil around and the thinkers would add their thoughts, extend someone else’s, politely challenge others thinking, or question peoples thoughts. They would spend 3 minutes at each group’s paper. I used an online stopwatch to maintain consistent think time for each station. I could see each learner’s thinking extend every time they read and added to someone else’s thoughts. These are some examples of their thinking.

Before I collected the thinking routines I asked the learners if they noticed any themes that had emerged from their shared thinking. Many were eager to share that musicians had to play instruments or sing, and had to have talent. Some learners disagreed and we had a rich discussion about musicianship and what the role of musician was. The challenges looked like this:

It is this kind of deep thinking that extends learner’s understanding of the overarching ideas of expression evoking emotion from the listener and in-turn creating an emotion for the performer. In the words of learners in the BFIS music room, “anyone can be a musician, all you have to do is be willing to take big risks”.

This is the environment and community is fostered be the learners in the music room. Throughout the school year, as all musicians have more experiences composing, arranging, listening, performing and thinking, their perspectives of their own musicianship may shift and shape their musical identity, which will carry on well after they have graduated.